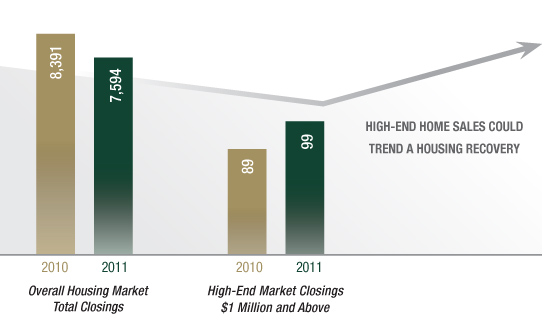 Sales of luxury homes in the Denver area were brisk in the first quarter of 2011, which bodes well for the overall

Although the million dollar-plus market is a small part of the overall Denver-area housing market, it is bucking the trend of the overall market, which is down from the first quarter of last year.

Homes costing at least $1 million accounted for 1.3 percent of the entire market in the first quarter of this year, compared with a 1.06% percent share during the same period last year. The numbers are small, but that equates to a 22.6 percent increase in the relative market share.

Why is fewer than 100 homes selling important?

Traditionally, following a housing downturn, high-end home sales lead the recovery. The reasoning is that the so-called “smart money” recognizes the value. Sophisticated, seasoned buyers – many who have weathered the ups and downs of real estate cycles – are often the first to recognize buying opportunities. High-end buyers in many cases are able to snap up homes at huge discounts, and they know they can’t last.

At the same time, jumbo loans – those above the conforming limits of  $417,000 – are more available today than a year ago. Rates for 30-year, fixed jumbo loans are still hovering around 5.25 percent, with various ARMs lower than 4 percent in some case.

The same forces are at work in the less expensive move-up market.

So if you want to take a page out of the “smart money” playbook, now is the time to take advantage of the competitive pricing and low mortgage rates.

Wells Fargo exec on how to fix the mortgage mess. Read more: http://money.cnn.com/2011/04/04/real_estate/john_stumpf_mortgage.fortune/index.htm