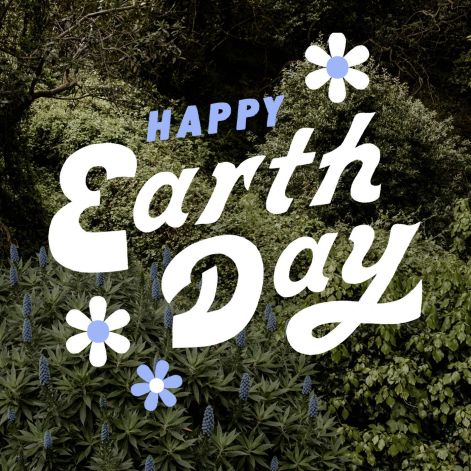 We hope your weekend was the best.  Did you know today is Earth Day?  According to Wikipedia…

Earth Day is an annual event celebrated on April 22. Worldwide, various events are held to demonstrate support for environmental protection. First celebrated in 1970, Earth Day now includes events in more than 193 countries,[1] which are coordinated globally by the Earth Day Network.[2]

On Earth Day 2016, the landmark Paris Agreement was signed by the United States, China, and some 120 other countries.[3][4][5] This signing satisfied a key requirement for the entry into force of the historic draft climate protection treaty adopted by consensus of the 195 nations present at the 2015 United Nations Climate Change Conference in Paris.

In 1969 at a UNESCO Conference in San Francisco, peace activist John McConnell proposed a day to honor the Earth and the concept of peace, to first be celebrated on March 21, 1970, the first day of spring in the northern hemisphere. This day of nature’s equipoise was later sanctioned in a proclamation written by McConnell and signed by Secretary General U Thant at the United Nations. A month later a separate Earth Day was founded by United States Senator Gaylord Nelson as an environmental teach-in first held on April 22, 1970. Nelson was later awarded the Presidential Medal of Freedom award in recognition of his work.[6] While this April 22 Earth Day was focused on the United States, an organization launched by Denis Hayes, who was the original national coordinator in 1970, took it international in 1990 and organized events in 141 nations.[7][8]

Numerous communities celebrate Earth Week, an entire week of activities focused on the environmental issues that the world faces. In 2017, the March for Science occurred on Earth Day (April 22, 2017) and was followed by the People’s Climate Mobilization (April 29, 2017).

Over the last 49 years, new construction has improved and homes are more efficient.  Automobile Manufacturers have provided us with more efficient and longer last cars and trucks.  The cost of renewable energy sources has improved dramatically, and on my recent road trip, wind turbines were everywhere!  As Sonny and Cher used to sing, “The Beat Goes On”…

Long story short, watch this YouTube Video from a little less than one year ago.

The World is not perfect, but it is better than it was, and with a little effort, we can all be a little better moving forward too!

SO, what’s with the Denver Residential Market this week according to the MLS?

Once again, as Sonny and Cher would say, “The beat goes on…”, and so does our market.  No apocalyptic change is readily apparent.  Sellers want to sell, Buyers want to buy.  Anecdotally, one of our listings received 3 written offers this weekend.  This is proof, solid communication between Broker and Seller obtains the best results, in the shortest period of time with the least amount of hassle.

So, if you are making a plan to move, buy or both, let’s sit down, talk a while and make a cohesive plan making your future so bright, you’ll need sunglasses!